One of the challenges of owning a home that was built before the U.S. Civil War is the constant need for maintenance and upkeep. A few years ago, before Sandra and Ray Stil well purchased his grandparents’ home in Warren, it had sat vacant for a few years and a radiator pipe had sprung a leak. The water washed away several layers of wallpaper, exposing the original, which was put up when Abraham Lincoln was president.

Of course, by then, the house was probably already a half-dozen years old.

“We think this might be the oldest occupied house in Warren. I don’t know, maybe in this whole area,” said Ray, as he sats on the front porch with his wife, Sandra. “This is at least the third porch on the house.”

Known as the Behrns-Qualmann Farmhouse, the home sits on more than an acre on 10 Mile Road, between Mound and Ryan. The original portion of the home, which is still in use, was built by 1856, though it may go back to as early as 1851, when Joachim Behrns first arrived in Warren Township to farm a 60 acre plot. In those days Behrns would load the harvest in a horse-drawn wagon and take it to the Eastern Market in Detroit to sell his produce.

In 1902, after Joachim’s death, his son, Henry sold the home to Carl Qualmann, a farmhand who had been working with the Behrns for several years. At the time, Henry Behrns was known as a heavy drinker and Behrns later said that the $6,000 sale price for the home and 60-acre farm was only agreed to when Behrns was drunk and should therefore be nullified. The dispute ultimately was decided by the Michigan Supreme Court that ruled the sale was final.

Carl’s son, Charles Qualmann, eventually inherited the home and when his daughter, Rose, married, a corner of the farm was subdivided off and a new home built for Rose and her new husband, Harold Stilwell – the parents of Ray Stilwell.

Eventually, the old house was sold out of the family and changed hands a few times. In 2005, the family living in the Behrns- Qualmann house moved out and the home sat vacant. That’s when the water damage to the wallpaper occurred. The water peeled layers of wallpaper away, leaving what Sandra calls “an archeological display” as wallpaper from the early 1860s; the 1880s or ‘90s; about 1910; the 1920s; 1935-40; and approximately 1955 can be seen in the various layers.

“They never removed any wallpaper, just added the next layer. It is truly a snapshot of home décor over the decades,” she said.

Today, the Stilwells acknowledge the property their home is on likely would have far more value if sold for commercial development.

“But we couldn’t let that happen. This is the first home in Warren that had electric lights. My granddad added an indoor bathroom in 1920. No. We hope to live in this house until someone else comes along who will love it just as much as we do.” 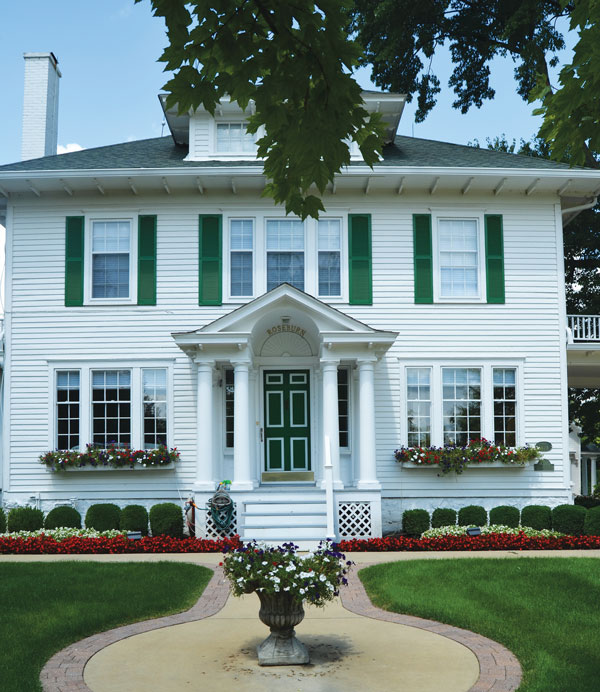 Long a Richmond landmark, the home at 36035 Washington Street goes by several names. First built in 1875 by Sanford Stone, an early village president who helped plat out part of the city, the Victorianstyle house 14-room home was originally known as the Stone House. After it was purchased in 1920 by Mabelle Streibig Weller and her husband Harold, who gave the home a major make-over to give it more of a Colonial Revival style look, the house became known as the Stone-Weller house. Mabelle decided to name the house “Roseburn Place,” in honor of her late mother, Rose Burns.

And so it is Roseburn Place today, according to Ryan Roscia-Huvaere, who has lived in the house for more than 20 years.

In 1993, his late father, Dick Huvaere, purchased the home from the Weller family and restored it to past glory. Huvaere operated Dick Huvaere’s Richmond Chrysler Dodge Jeep Ram dealership, long a mainstay in the Richmond community. Today, Roscia-Huvaere serves as owner, president and dealer principal of the long-time dealership, about a 25 minute walk away from the historic home.

It is hard to select just one feature of the home that most makes it stand out to the first-time visitor. Roscia-Huvaere suggested it is the white picket fence that surrounds the property and while that certainly does evoke a sort of Tom Sawyer frame of mind, for this writer, the true envy lies in the wrap-around porches. Original to the home in 1875, the porches were enclosed by the current owners to provide a more year-round sitting place.

With state historic marker out front, Roscia-Huvaere says there are some occasional visitors who will stop to read the sign or snap a photo or two from the street, but Richmond remains “a nice quiet community,” where people aren’t bothered in their homes.

Living in an historic home always comes with a few challenges though.

“The ceilings were built much lower because people were actually shorter 100 years ago – so you have to duck when you go down the stairs!” he says. 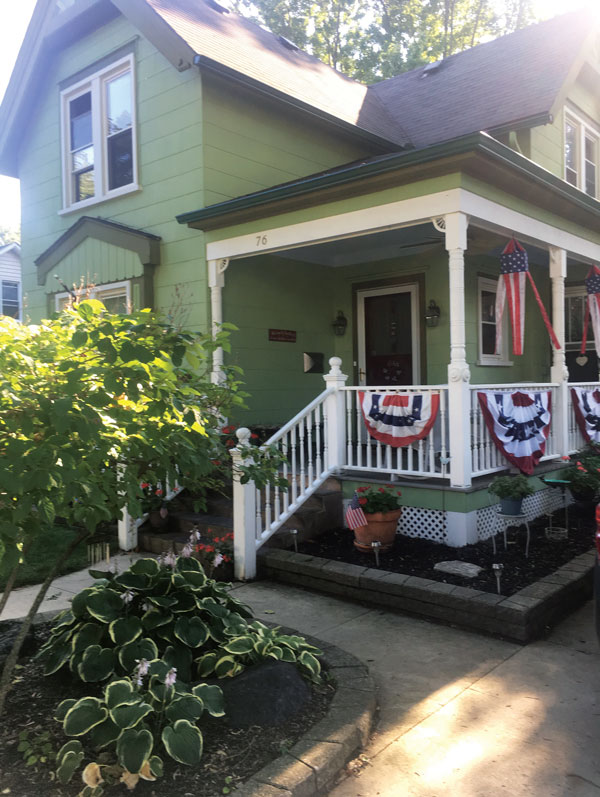 In Mount Clemens, Kip Van Horn knows a few of the challenges that come with living in an older home. His family has lived at 76 Miller Street since 1902 and he has lived in the home pretty much his entire life.

It wasn’t until he married Debra, about 10 years ago, while in his mid-50s, that the house got a kitchen remodel.

“It was the same kitchen from his grandmother from 100 years ago – so I said a new kitchen was a condition of the marriage,” Debra says with a laugh.

“OK, I admit, I was a little tired of looking at it,” Kip says. “It hadn’t changed since before I was born.”

A retired electrician, Van Horn has been able to keep the home up to date, relying on some former work colleagues to lend a hand on some tasks to complement his skills with electrical work. A few years ago, a back bedroom was converted into a bright and airy sitting room.

The home was built in 1900. In 1902, it was purchased by Van Horn’s greatgrandfather, Hermann Gundert, who was the second pastor of Zion United Church in Mount Clemens. Gundert’s daughter later married a man named Mueller. During World War I, the Mueller family changed its name to Miller, during a wave of anti-German sentiment (During Gundert’s tenure, all of the church services at Zion were conducted in German, a practice that also stopped around the time of World War I.)

In 1934, the home was converted in to upper and lower flats, creating a situation where one generation of Muellers / Millers was living upstairs and another downstairs.

In about 1946, the house was given to Christine Miller, Kip’s mom, as a wedding gift. Kip came along a few years later. Today, the upper flat is rented out to a tenant.

“I just don’t know anything else. This has always been my family home. I can’t imagine living anywhere else,” Kip says.