Alice Cooper could never have predicted this. 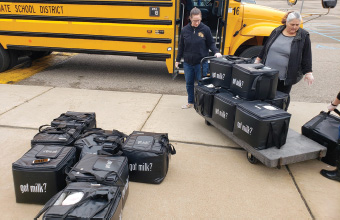 But districts found ways to mark those all-important milestones for graduating seniors. Celebrations aren’t being pushed completely to the side. They’re taking a new form. Utica Community Schools was featured by CNN’s Chris Cuomo for hand-delivering nearly 2,200 care packages including honor cords, certificates, caps, gowns and a yard sign to each graduate’s home. Chippewa Valley Schools also hand-delivered roughly 1,700 yard signs and Class of 2020 shirts to seniors at home as well.

“We are having a virtual graduation, and we’re still holding on to hope that there’s some way we can at least have them walk a stage, so they can be presented their diploma jacket,” said Mark Blaszkowski, Roseville Community Schools superintendent. “It is so hard because it seems like they’re getting hit the hardest. There’s no closure for them and that’s difficult.” Throughout St. Clair Shores in the Lake Shore School District, parents and students decorated the front doors of their homes to celebrate. Some doors featured the sports athletes played and clubs or events they were involved in, while others took a humorous approach and stuck a mask over a cap-and-gown photo. “I’m disappointed I won’t get to take part in the traditional milestones that seniors typically have,” said Rebecca Dick, 2020 graduate of Lake Shore High School. “But the new things helped fill the gaps.” Lake Shore also had the elementary schools of graduating seniors post a congratulatory message on the outside marquee. In addition, the district bought a billboard near I-94 with a message of congrats as well.

Learning to Learn A New Way Even though learning took a new form, there were other challenges that had to be met, such as making sure the 130,000 students in Macomb Intermediate School District had access to meals. The superintendents of the school districts, plus leadership of MISD, put the wheels in motion and within 72 hours had a meal plan in place. By mid-May districts had provided more than 1.8 million meals to kids. Michael DeVault, superintendent of the Macomb Intermediate School District said, “It is a privilege to be part of the educational leadership team in Macomb County. I have worked in this county for over 30 years and this is, by far, the greatest challenge we have faced during my tenure. We have, as a team of educators, made certain that families receive food, mental health support and instruction for their children in a whole new environment.” Roseville Community Schools was in the middle of launching a one-to-one computer initiative when the pandemic struck. “It was a helluva lot of work,” said Blaszkowski of the way educators pivoted their lesson plans. “You have to have people who are passionate about what they do to be able to make that switch and change. We were in the midst of starting a one-to-one initiative and had given out some of the devices. So, on top of the teachers having to transform to a different type of teaching, we had to scramble and deploy these devices.” Colleges and universities also had to pivot to keep students’ careers on track. Oakland University enrolls 2,000 students in Clinton Township and Mount Clemens. On March 11, OU immediately suspended all in-person class instruction. The university then undertook the Herculean task of replacing face-to-face classes with remote learning within days. Remote learning took effect on March 16 and was scheduled through the end of the winter semester. OU then moved all summer classes to remote learning as well. With OU staff working remotely during the stay-at-home order, they offered services “virtually” via phone, email or on–line including academic advising and financial aid appointments. For prospective students interested in an OU degree, OU conducted live virtual information sessions.

Helping Where They Can

While the school year took a sharp turn, many teachers and students decided not to sit back and let an opportunity to help pass them by. At Romeo High School, the robotics team stepped up when their season came to a halt in March. “A friend of mine asked us if we could make a couple dozen shields that he had found online for his fire department,” said Mike Savage, Robotics, Mechatronics and Physics teacher at Romeo High School. “Some of the teachers, mentors and I started printing up the design and we realized that the need was much larger. We began to expand, sending the request to my robotics students, and those who had printers volunteered to help.” Eventually, Savage and his team were able to recruit more than 70 3D printers to create more than 10,000 bands for face shields. “Our shields have been distributed to most of the major hospitals in Macomb, Detroit and Oakland counties. We have sent them to Muskegon and Kalamazoo as well as California and we are currently distributing to dentist offices and restaurants,” said Savage. “We did this because we wanted to help.” Lake Shore High School art teacher Holly Bolen also took advantage of having a 3D printer to help health care workers. She took the printer home when schools shut down to learn the equipment better, but then she saw a need for ear savers, which is a bit of plastic that connects the elastic on face masks behind the head instead of over the ears. After using up the supplies she brought home, she started funding the project herself. But others stepped in and got her the supplies she needs. “I am a one-woman show, as far as it goes for who is helping me cut and prepare these,” said Bolen. “Students can’t really help, but I want to be able to tell them next year how important it is to be a helper during times like these. I want to be able to demonstrate the good we can do when we often feel helpless or scared.”

At press time, the direction for the 2020-2021 school year was yet to be decided. Oakland University and Macomb Community College have announced online classes for summer and Macomb announced the Fall 2020 semester would be virtual as well. Parents, students, teachers and administrators don’t know if they’re preparing for an online school year or face-to-face teaching or maybe even a combination. Whatever the school year ends up being, one thing is clear, “We have to give kids way more credit than we do. They’re way more malleable than adults can be,” said Blaszkowski. Check out macombnowmagazine.com. For our 2020 stand out grad story.