Serving at Selfridge, former World War II fighter ace David Schilling had two revolutionary ideas. One helped lay the foundation for America’s eventual ability to survive and emerge from the Cold War victorious. The other was to strap a jet engine to a cart and to use it to melt the snow on the runway. 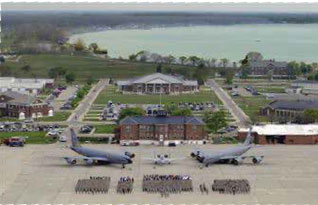 To be as kind as possible, let’s just say the jet engine/ snow blower idea was a bit ahead of its time. But Schilling’s plan to fly a group of fighter aircraft from Selfridge Air Force Base to Germany was a gamechanger when it took flight on a warm July day in 1948. It proved, for the first time, that fighter aircraft – P-80 Shooting Stars, the first jet aircraft ever operated at Selfridge – could fly to Europe to repel a Communist led invasion of American a llies, rather than have to be ferried over on a boat, no doubt playing a key role in the delicate balance of power in the early days of the Cold War.

To be sure, those early jet fighters needed to make multiple refueling stops along the way, but the well publicized point was made. The U.S. Air Force was truly a global power, thanks to an idea launched at Selfridge Air National Guard Base.

“It may sound cliché to say that we are standing on the shoulders of giants,” said Brig. Gen. John D. Slocum, commander of the 127th Wing at Selfridge. “But when you flip to any page in the 100-year story of Selfridge, that is exactly the case. And when I walk out onto the flight line today, or talk to the airmen in a hangar or in the supply shop, the office spaces – I’m in the company of this generation’s giants. Men and women who are leaning forward into history, making a difference today.”

On July 1, 2017, Selfridge will mark 100 years since the first soldier – from Company G, 32nd Infantry Division, Michigan National Guard – arrived at Selfridge Field in Harrison Township. It was a swampy, private air field owned by an auto baron – Henry B. Joy – who had served in the Navy during the Spanish-American War. Since that day – thanks in part to a few “Save our Selfridge” campaigns along the way – military aviation has had a mailing address in Macomb County.

As the base community prepares for a Centennial Open House and Air Show, Aug. 19-20, both the present and the future are firmly on the minds of base personnel.

Some 150 airmen of the Michigan Air National Guard are currently deployed to hot spots around the world, mostly in bases in the Middle East. This particular deployment came primarily from the support shops around the 127th Wing – think security forces and firefighters, cooks and chaplains – all the infrastructure support needed to undergird a combat air wing operating on the other side of the globe. Most of those troops will be deployed into the late fall or early winter – missing the Centennial events at the base, as they put mission needs first.

Even as they work to support those deployed personnel, base leaders and numerous community partners, led in part by County Executive Mark Hackel’s office, are working to support Selfridge’s bid to serve as one of the next bases for America’s newest fighter aircraft: the F-35 Lightning II. An announcement on that decision is tentatively expected the day before the Selfridge Centennial Open House. Military leaders believe that, if Selfridge is selected as an F-35 base, it will secure future operations at the base for at least another generation or two – well into Selfridge’s second century.

“Despite all the accomplishments of Selfridge over the years – service here by Tuskegee Airmen in World War II, launching combat air patrols on Sept. 11, 2001 – we still believe that our best days are ahead of us,” Slocum said. “The caliber of the young Airmen who are joining our wing today give me great hope and great confidence about the beginning of our next 100 years.”

Macomb County native Dan Heaton is a veteran of both the Air Force and the Navy, first enlisting at Selfridge in 1984.