“I was in Mount Clemens … last week and went to the old track to walk around it … Before I left I closed my eyes and … thought I could hear those old motors screaming down the backstretch again.” Rex Manglos

“So many memories from the Fast Track as it was called … It will live on in my heart as the place my family enjoyed our time together, every Monday, Thursday and of course, Saturday nights.” Dave Sheldon 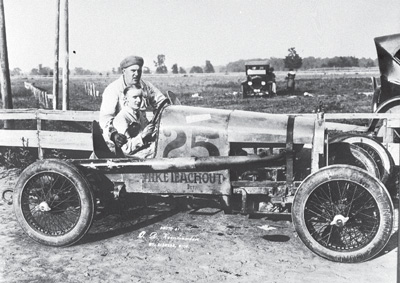 My own memories of the Mount Clemens Race Track are likewise very strong. When our family first moved to Macomb County nearly 50 years ago we lived in an old house in Mount Clemens and back then there wasn’t air conditioning. Falling asleep on hot summer nights with the windows all open, we could distinctly hear the rumble and roar of the powerful engines off in the distance.

The track was located at the intersection of what is now I-94 and North River Rd. Its origins date to 1916 when a harness race horse track was built and named the Clinton Driving Park. Horse racing on the site ended in 1924 and the track was used for auto racing for a few short years.

Look carefully at the smaller photograph, circa 1924. The driver and mechanic pose proudly with Race Car No. 25. After this the track was abandoned and returned to only trees and brush.

Shortly after World War II, the property was purchased by local residents Dr. Clayton Stubbs and his wife, Ruth. Their intent was to make it a hunting preserve. In 1950, local race car drivers approached the Stubbs to restore the old track and reopen it for auto racing.

The first race on the restored track was September 3, 1951 and drew 5,000 enthusiastic fans. Our large photo above from June 1953 shows the lineup for a 150 mile (300 laps around the half-mile dirt oval) stock car race. If you look carefully, the starter is about to drop the checkered flag. Because of the inevitable shower of mud, stones and debris, most of the cars don’t have headlights. Look closer into our photo and you can clearly see the dirt track, the names and numbers painted on the cars, the fencing, and the packed bleachers beyond.

“Why do I drive? ” … We get to race them, we get to wave at the bleachers full of people, and it made us feel like we were heros for a day.” Mount Clemens race driver.

Races were divided into five classes or divisions: street stocks, super stocks, limited sportsmen, mini-modified and “powder puff ” which was a womans’ division of street stocks. Many famous drivers came from all over the country to race at Mount Clemens, many are now in the Michigan Motor Sports Hall of Fame.

The track included both half-mile and quarter-mile ovals and was eventually paved in the mid-1970s. The Winkler family bought the track as a land investment in 1977 and improved it with new lights and sound system.

In the end, a not-too-profitable business began to lose money and the race track closed after the 1985 season. The land was sold for development, but the track lives on in the memories burned into the minds of the drivers, mechanics, starters, and fans.

If you are ever at the intersection of North River Rd and I-94, try to pull over for a few moments, roll your windows down and close your eyes. Can you hear that rumble and roar of the powerful engines, see the cars fishtailing in the turns and accelerating on the straight away? Can you hear the roar of the fans, and see the checkered flag waving? On those particularly hot summer nights if I pass through Mount Clemens, I clearly can.