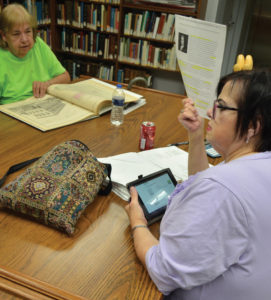 It seems it’s only natural to wonder where we come from, who our ancestors were, what drove them to overcome hurdles and even track down physical traits that run through our families. Sometimes, even researching the past can give us clues to our own futures.

Tracing a family tree can answer many of the questions we have about our past, but it can also dig up more mystery. Heidi Christein, librarian and archivist for the St. Clair Shores Public Library, said of genealogists, “Generally, it is people who are middle-aged and older. There are some young genealogists, but for the most part it’s an older crowd. Some people want to learn more for patriotic reasons, such as to get membership to the Daughters of the American Revolution. I think everybody who does it, does it for a slightly different reason.”

Linda Manning is a math tutor who retired from banking/ commercial real estate. She’s been doing genealogy as a hobby for the past five years. “It’s terribly interesting,” Manning explained. “My father’s family had been traced back to the Norman invasion of England. Darwin bought our family home in England. We were custodians of the Greenwich Palace where the Tudors lived and held the position for more than 400 years. But it’s nothing more than personal interest.”

Shuffling through the past can seem overwhelming at first. Begin your research at the library with books or magazines on how to organize your family tree. Then, set a goal. Start with parents, grandparents and great-grandparents.

“You always start closest to you and work backward,” explained Christein. “Begin with a very small point then you build a pyramid out. If you ask around, it’s not uncommon to find an older relative who started this kind of thing or has old papers. Old photo albums are also a good place to look. Anything you can find at hand or from your family is the best place to start.”

Christein also suggests Web sites dedicated to genealogy and luckily, a lot of historical documents have been moved online, so accessing them from home is convenient. “Ancestry.com is very popular. But they don’t create records, they’re an aggregator,” she said. “You can find records of vital statistics, immigration and military records. There are also digitized city directories and obituaries that will get you through the 20th century and even back somewhere to the 19th century fairly easily.”

However, Christein warns that at some point, physical records won’t cut it. “At some point, you will hit what I call the ‘mists of time,’ where if you’re not European royalty, you won’t find anything,” she said.

Lurking through the past can be incredibly rewarding and remarkably frustrating. Setting expectations can help keep researchers inspired and less downtrodden. “You start out slow and have no great expectations,” advised Manning “You’ll certainly find out something interesting along the way. You will find skeletons. If everyone was straight as an arrow, but what fun would that be?”

Christein agreed. “Scandal makes it fun. ‘Scandal’ changes over time so what was scandalous 100 years ago isn’t a scandal now. With every record you find, there’s a story behind it. If you’re lucky enough, you might find old newspaper articles on the wedding or the death, that shed a more human color to it. You might find you’re related to someone famous.”

Sifting through the “mists of time,” as Christein said, genealogists look for certain records that are the proverbial “key” to unlocking the past. Birth certificates, death records and military records are all excellent sources, but as researchers travel further and further back, some records become scarce, if they ever existed at all.

“If your parents immigrated to the U.S., you probably won’t be able to get as far, but it’s possible to do research if your family is African-American. Those records will be different. Those will be slave records,” said Christein. “Census records are also helpful. Census records locate a person or family at a particular time and place. They usually give you other members of the household, tell you the person’s occupation and give you an indication of educational level. The 1930s census, for example, asked if there was a radio in the house. That showed if they had electricity. It gives you a good idea of the circumstances of a family.”

However, records weren’t really kept in the 1600s, so finding ancestors beyond the 15th century can be difficult.

But what drives people to search the past? What’s the allure to researching your lineage? For some, it’s the want of a connection and to feel rooted in a place. For others, it’s different.

As Manning searches further and further back in time, the more of a connection she feels with history. “Some history has to come into being because of this. You start appreciating a little bit what we have here and what they had to go through,” she said. “It all ties into things much more deeply and meaningful if you look.”